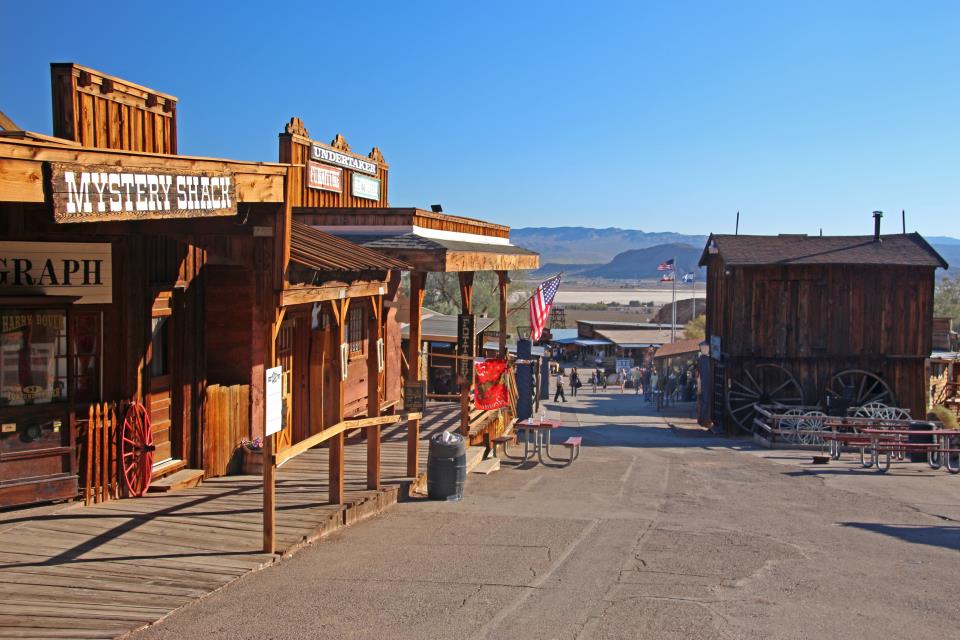 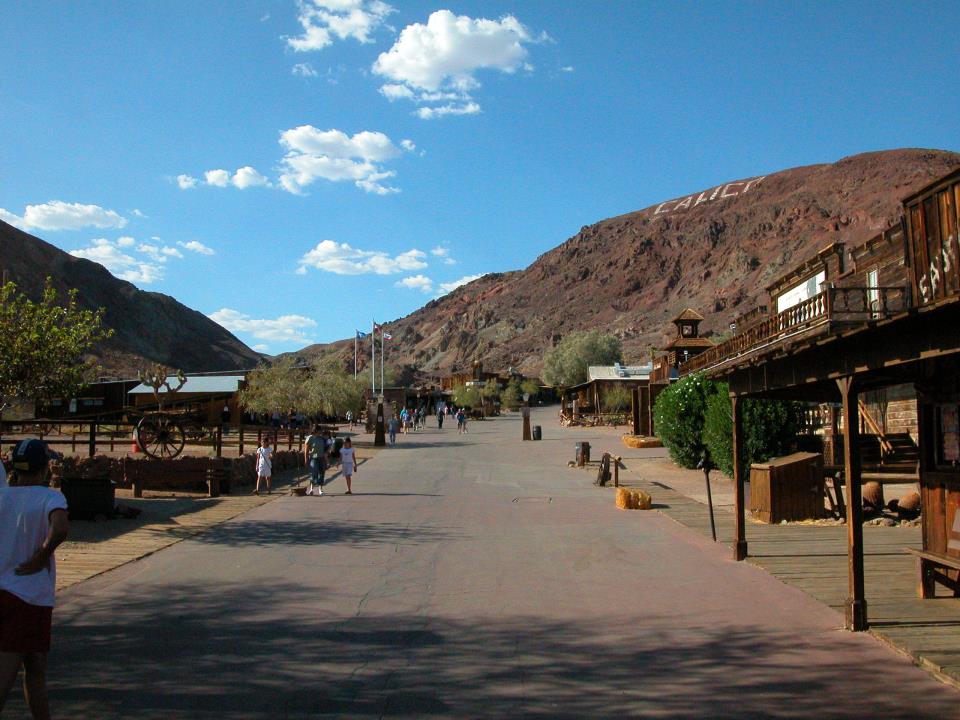 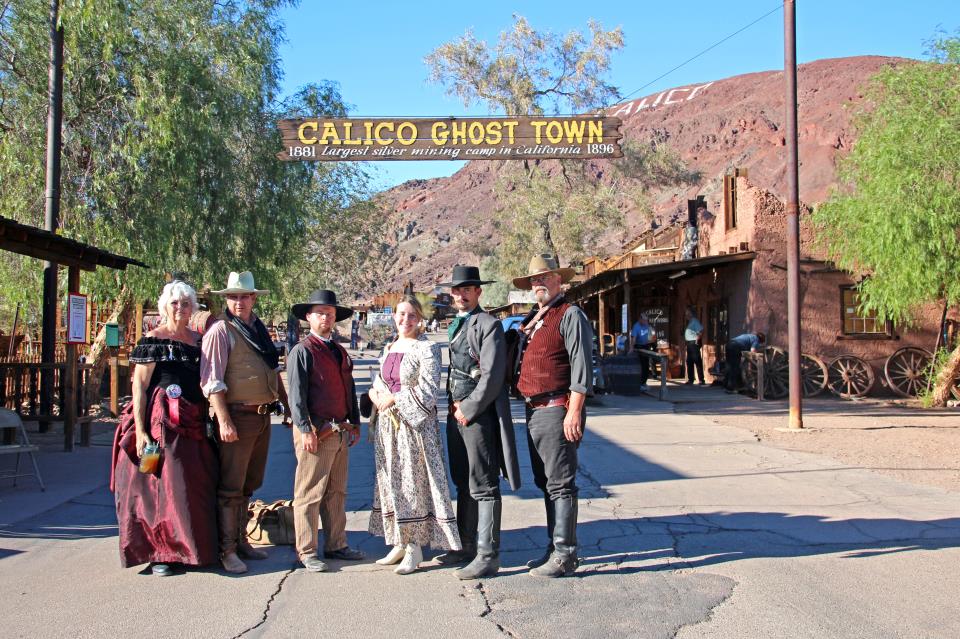 Calico Ghost Town is the state's official Silver Rush Ghost Town as designated by state legislation in July 2005. 1881 marked the beginning of one of the largest silver strikes in California history and the birth of Calico. This authentic silver mining town lives on as one of the few original mining camps of the Old West. One third of the town is original; the remaining carefully reconstructed to recreate the "spirit' of Calico's Old West past. Walking tours with Calico's historian examine the life of miners, and the famous 20-mule team. A narrow gauge railroad operates within town limits and a hard rock silver mine offers up underground exploration.

Calico holds a place in denim jean history as well. A pair of Levi Strauss & Co. jeans made around 1890 were found by a hiker in an abandoned silver at Calico. The hiker received $25 and a couple of free pairs of jeans from the jeans maker for her trouble. Their current value, according to Levi archivist Lynn Downey, is $25,000. 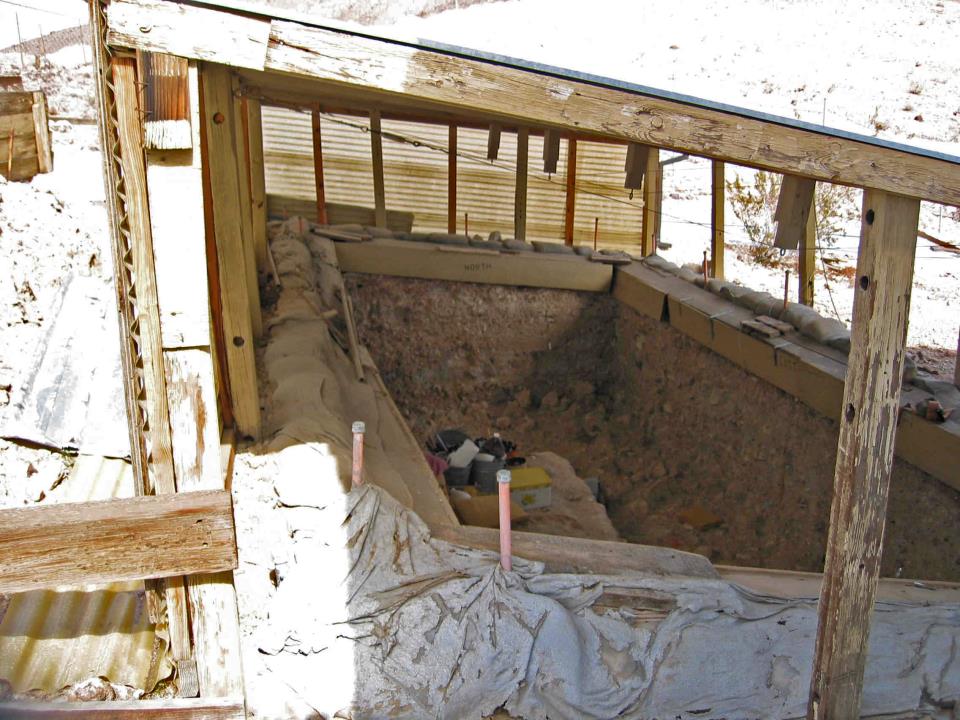 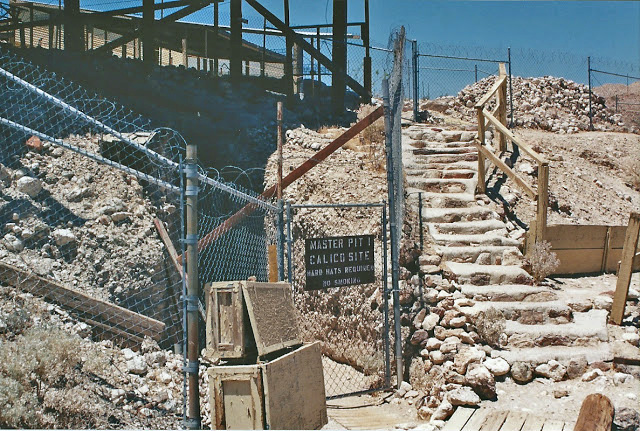 The Calico Early Man Site is one of the most important archaeological sites in North America, providing a unique in place museum of Pleistocene archaeology and geology. It consists of two master pits, where most of the findings were made. The site is about 20 miles northeast of Barstow. 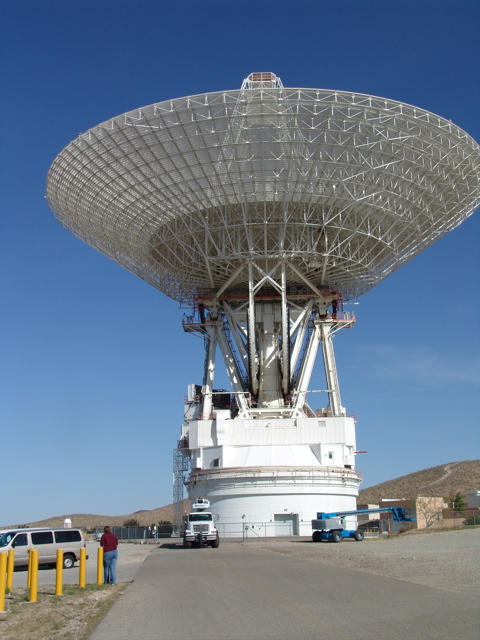 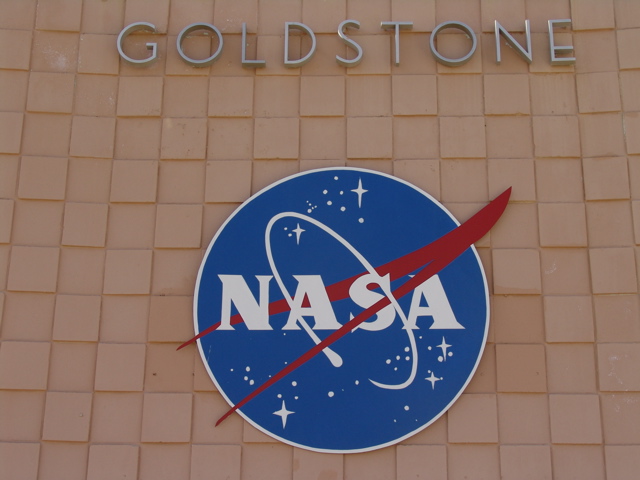 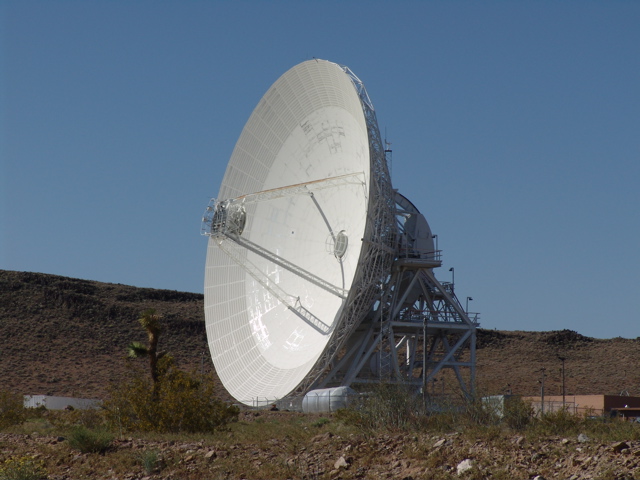 The NASA Deep Space Network (DSN) is an international network of antennas that supports interplanetary spacecraft missions and radio and radar astronomy observations for the exploration of the solar system and the universe. The network also supports selected Earth-orbiting missions.

The DSN currently consists of three deep-space communications facilities placed approximately 120 degrees apart around the world: at Goldstone, near Barstow; near Madrid, Spain; and near Canberra, Australia. This strategic placement permits constant observation of spacecraft as the Earth rotates, and helps to make the DSN the largest and most sensitive scientific telecommunications system in the world. The complex provides tours upon advance requests. 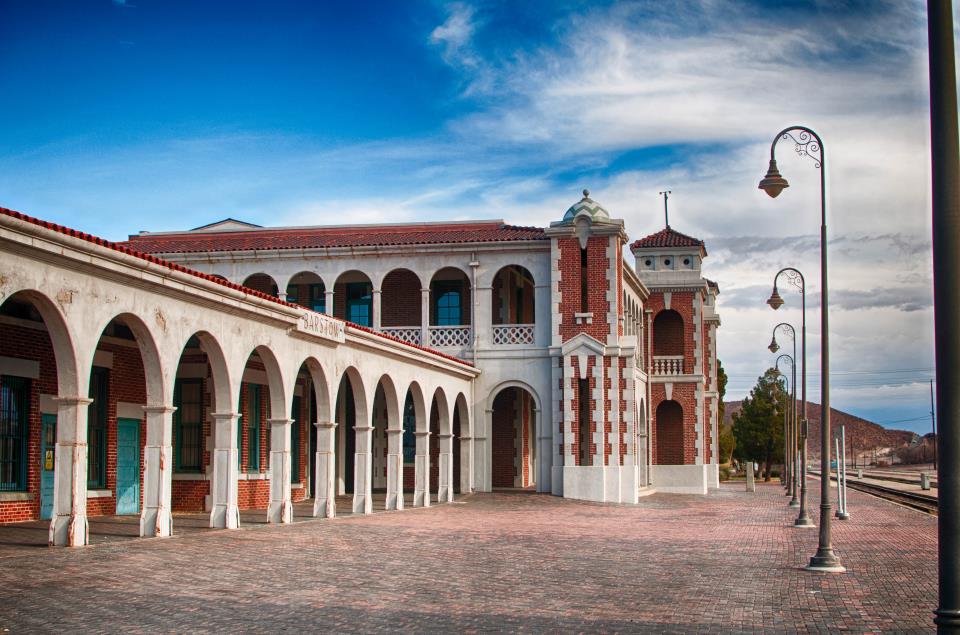 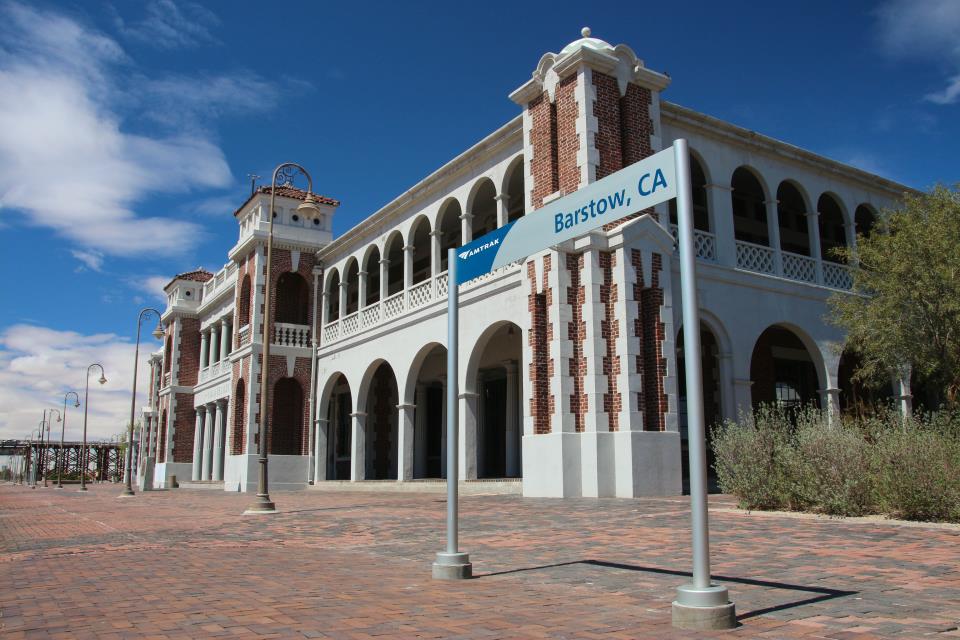 The Historic Harvey House, a landmark on the National Register of Historic Places, was designed by Francis Wilson and constructed by the Santa Fe Railroad in 1911. Wilson's design melds Classic and Mission Revival motifs. The plastered arcades, tile-domed towers, and red-tile roofs transmit a Hispanic theme, but the planning, massing and detailing are derived from the American Beaux-Arts movement.

"Harvey House" is a generic term. Each individual Harvey House had its own name. The Harvey House in Barstow was named Casa del Desierto and is one of the finest remaining depot/hotel in California, but it almost perished. It became famous in the 1930s as the setting for Judy Garland and Angela Lansbury in the movie "The Harvey Girls," a fictionalized account of the civilizing influences of the employees of the Fred Harvey Company on the American Southwest. After World War II, however, with the decline of rail travel, the Casa del Desierto fell into disuse and was eventually abandoned. The 1992, the Landers Earthquake destroyed the building's un-reinforced brick towers, interior gypsum block walls, and most of the cast stone anchorage. Large sections of the second floor exterior walls collapsed. In the early 1990s, the City of Barstow began work on restoring the building to its original splendor. The building now houses the Western American Railroad and the Route 66 Museums. 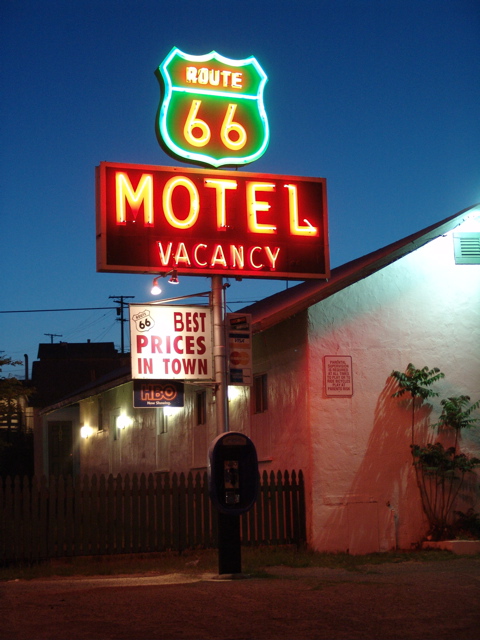 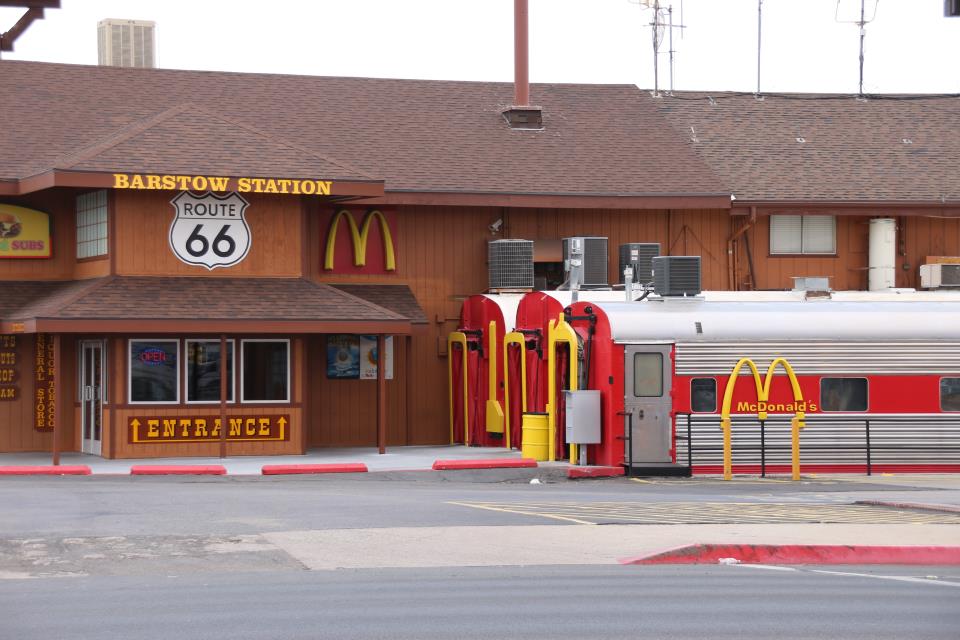 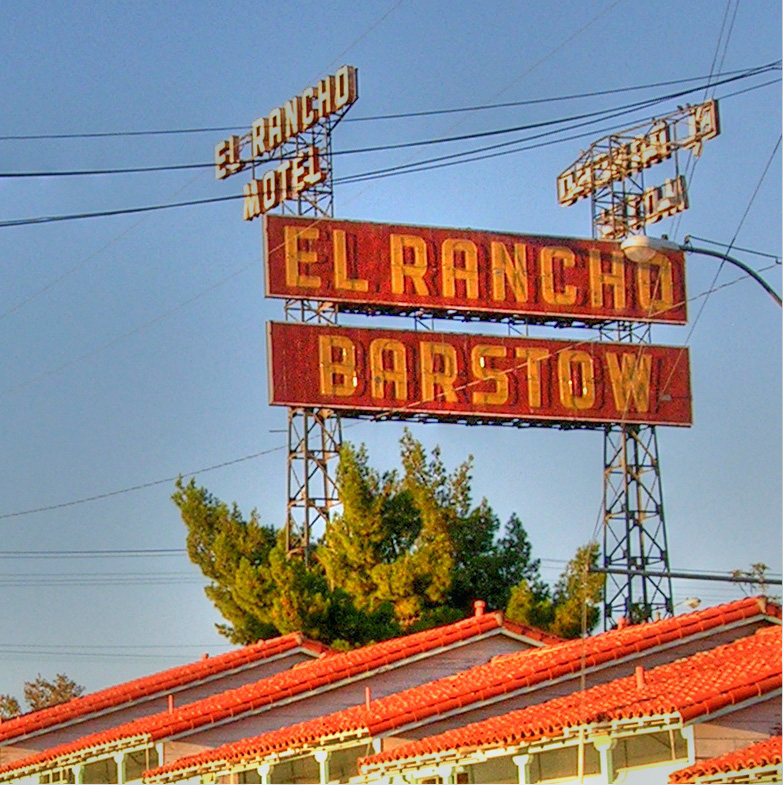 Perhaps no other highway in the U.S. is as fabled as Route 66. It has been immortalized in song, literature, and even a TV series as the Main Street of America. Automobiles came early to the desert, following the railroad with its valuable water resources. In the early 1900s, the route was known as the National Old Trails Road. In 1926, it became U.S. Highway 66, and within a decade it was paved all the way from L.A. to Chicago. Heavy travel by dustbowl emigrants led John Steinbeck to label it as the Mother Road. Although, it was bypassed by Interstate 40 in 1973, and the Route 66 designation was officially dropped in 1985, tourists from around the world still cruise through Barstow on the historic thoroughfare. 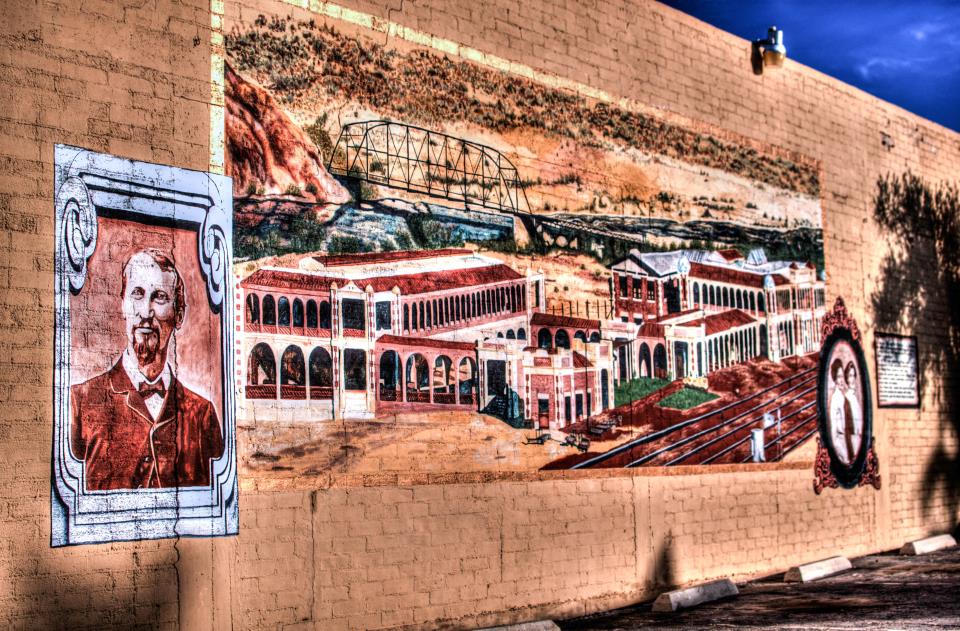 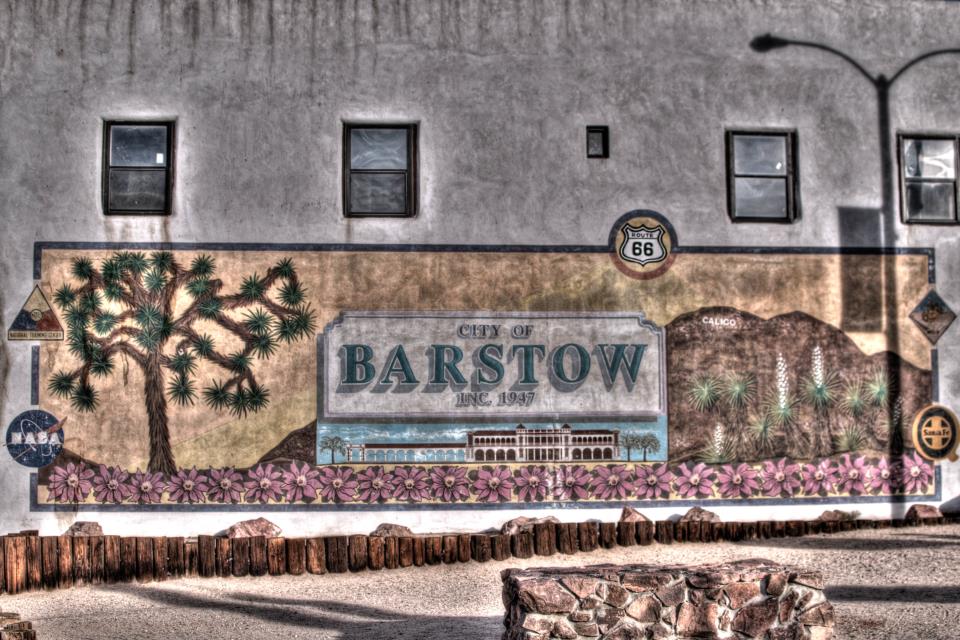 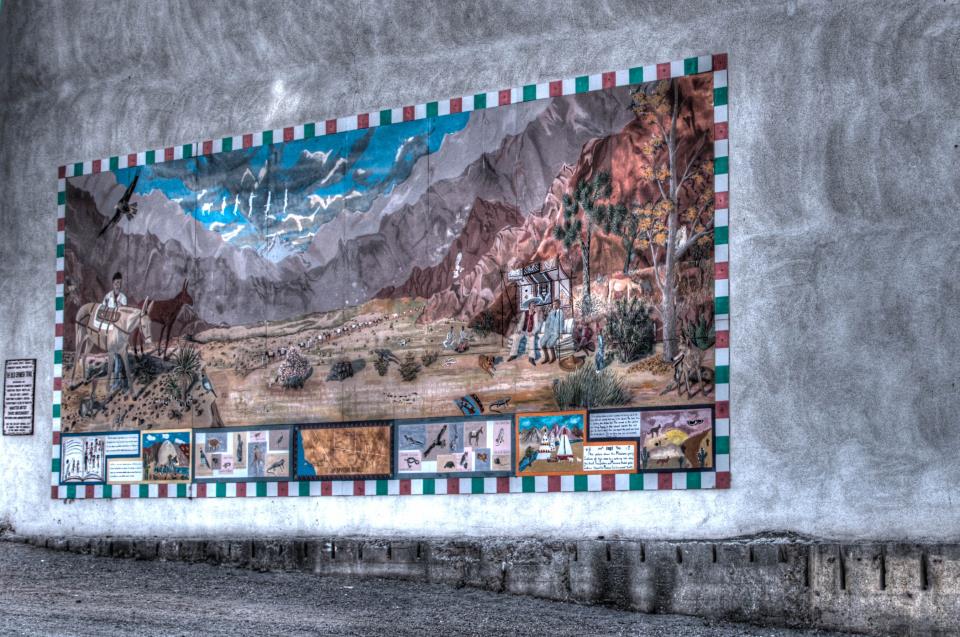 Main Street Murals is a non-profit organization created to bring tourism and economic revitalization to downtown Barstow though a walking tour of murals. More than 30 murals are planned for the downtown area from First Avenue to Seventh Avenue depicting local history from the Stone Age to Space Age.

Murals completed to date include William Barstow Strong, the name sake of the city; the Historic Harvey House, built in 1911; a map of the Mormon Trail, with scenes highlighting the aspects of the journey; teams of Camels used by General Beal to help open the Wild West; an early automobile precariously descending a hill depicting the formation of Route 66; The Gold Rush, marking the main mining areas with insets of early mining life and the trade that followed, and a series of six portraits of the early explorers of the Mojave. 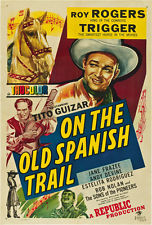 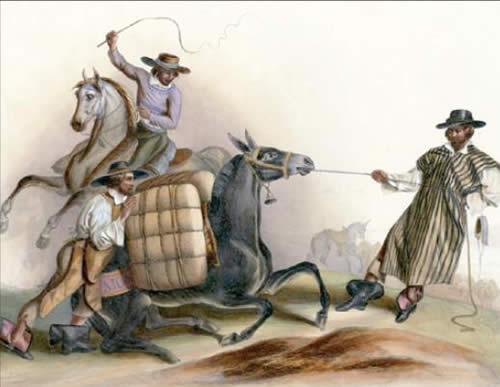 The Old Spanish Trail, which traverses through Barstow, was called the “longest, crookedest, most arduous pack mule route in the history of America,” by Explorer John C. Fremont. For traveling Mexican caravans between 1829 and 1848, the Old Spanish Trail was known as the shortest path to riches between Los Angeles and Santa Fe. It was a trail of commercial opportunity, western adventure and a dose of mischief involving slave trading, horse thieving and raids. The Old Spanish Trail route was established along a loose network of Indian footpaths that crossed the wide expanse of the Colorado Plateau and the Mohave Desert. With time, this newly established trade corridor attracted frontiersman and U.S. military expeditions.

As the Old Spanish National Historic Trail Comprehensive Management Plan is put into action, the history of the trail will become known to more people through signage, kiosks, roadside pullouts, interpretive programs, and more. The trail is not currently marked through Barstow, although visitors can receive information on the trail from the National Park Service and Bureau of Land Management offices on Barstow Rd in Barstow. 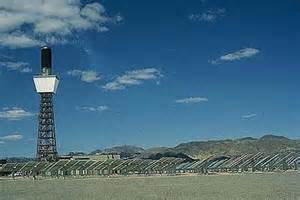 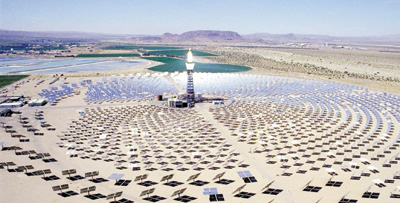 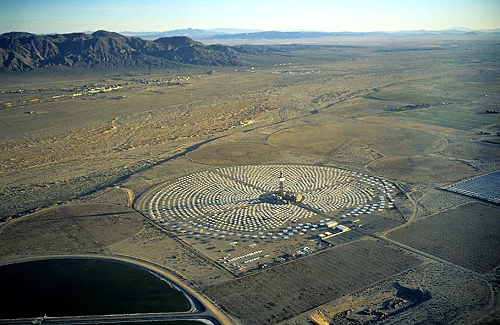 Solar One, built in 1982, was an experimental solar concentrator of the solar tower design. By 1993, it had been upgraded and renamed "Solar Two."

This is how they worked: A large array of computer-aimed mirrors (up to 2,000), called heliostats, focused all their light onto one central tower that contained water in the case of Solar One, and (more efficient) salt in the case of Solar Two. In either case, the superheated liquid was circulated and used to power conventional steam generators which, in turn, produced electricity. Solar Two put 10 megawatts — enough to power about 6,500 houses — of electricity back into California’s power grid at the peak of summer.

In 1999, Solar Two was decommissioned; it was converted by the University of California in 2001 into an Air Cherenkov Telescope which measures gamma rays hitting the atmosphere. In August 2009, Southern California Edison (SCE) dismantled Solar Two to make way for potential future renewable energy facilities.

SEGS 1 and 2, owned and operated by SunRay Energy Inc. (headquartered in Malta), is a solar power plant located in Daggett with a peak output of 45 megawatts. This was the first of three separately owned sites within 40 miles of one another (surrounding Barstow) that make up the nine solar fields in the Solar Electric Generating System (SEGS). Together the facilities can generate about 354 megawatts at peak output and produces electricity for the Southern California Edison power grid supplying the greater Los Angeles area.

These solar facilities are referred to as "advantageous peak facilities", as they operate at their peak when it is sunniest, which is also when local power requirements are greatest, due to increased air conditioning demand. The facilities regulate their power supply through the use of supplemental natural gas fueled electric generating plants. SEGS 3 through 7 are located near Kramer Junction (highway 58 and 395) and generate 150 megawatts. The SEGS 8 and 9, which produce around 160 megawatts at their peak, are located near Harpers Dry Lake, north of Hinkley. SEGS 3 through 9 are owned and operated by FPL Energy.